"What will it cost to build my website?" It's the most common question that WordPress development and design companies have to answer.

And it's also the hardest.

Until now, there hasn't been a compelling, data-driven analysis of how much this type of work really costs. People talk about it within the industry, so you can find some anecdotal evidence with a few data points but nothing comprehensive. Prospective clients don't know what they should expect to pay, and companies have no idea if what they're charging is in line with what their competitors are getting paid.

In early 2018, we ran a survey to try to answer this question.

We asked WordPress design and development companies around the world to share (anonymously) information about the size of their company, their pricing model, what they charge, their revenue, and how they run their business.

We're happy that so many companies responded and even happier to share the results of this first-ever worldwide WordPress design and development company survey.

We'd like to give a hat tip to Rand Fishkin of Moz, whose survey of SEO consulting agencies inspired this project and informed many of the questions we asked.

Note: Because many responses came from sole proprietors, we use the word "company" to refer to respondents, rather than "agency" or "shop" which imply a larger company with staff.

We invited founders and CEOs of WordPress design and development companies to complete our survey on SurveyMonkey. The data was anonymized—meaning that we don't know which agency made which responses.

We received responses from 261 companies around the world. We decided to exclude responses from countries from which we got fewer than ten responses so that the identities of agencies in countries with only a few responses would stay anonymous.

Our final survey results include responses from 184 companies based in the United States, UK, Australia, the Netherlands, and Canada, respectively.

The vast majority of respondents were the sole founder, or among the founders, of their company.

22.8% respondents described their companies as "full-service digital agencies", providing full solutions for their clients that go beyond simple design/development. 13.6% described themselves as "freelance". 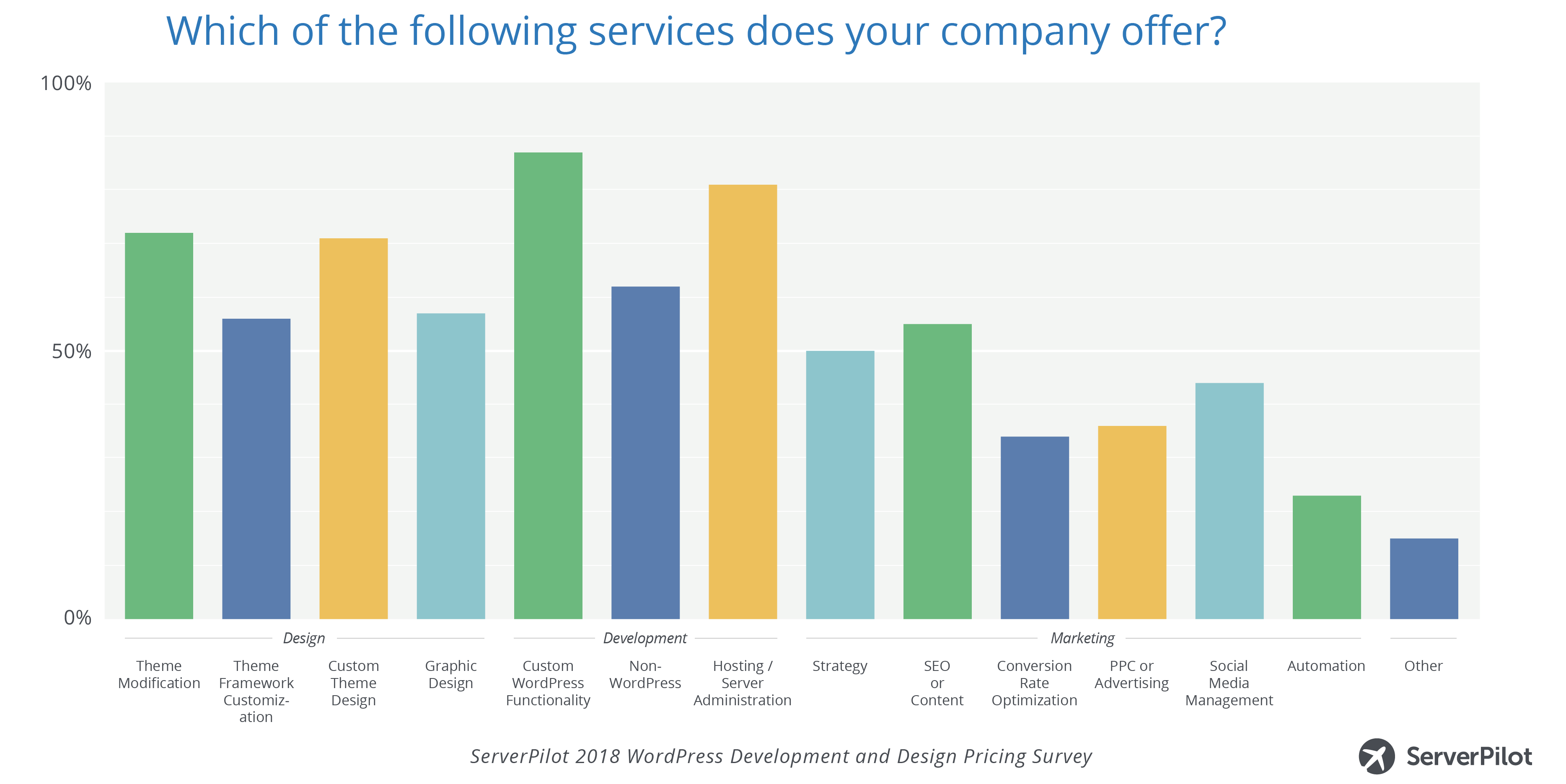 The common denominators among these companies are custom functionality, custom themes, and hosting. Other services don't seem to be as universal, because companies prefer to specialize instead of offering dozens of services. 85.3% of companies reported providing at least one of the specific services listed above.

Few companies say they use any pricing models other than the classic standbys: per-project or hourly. Just 4.4% reported using a performance-based model, with 3.2% reporting that they use other models such as monthly retainers. (Some companies use multiple pricing models, so the numbers don't add up to 100%.) 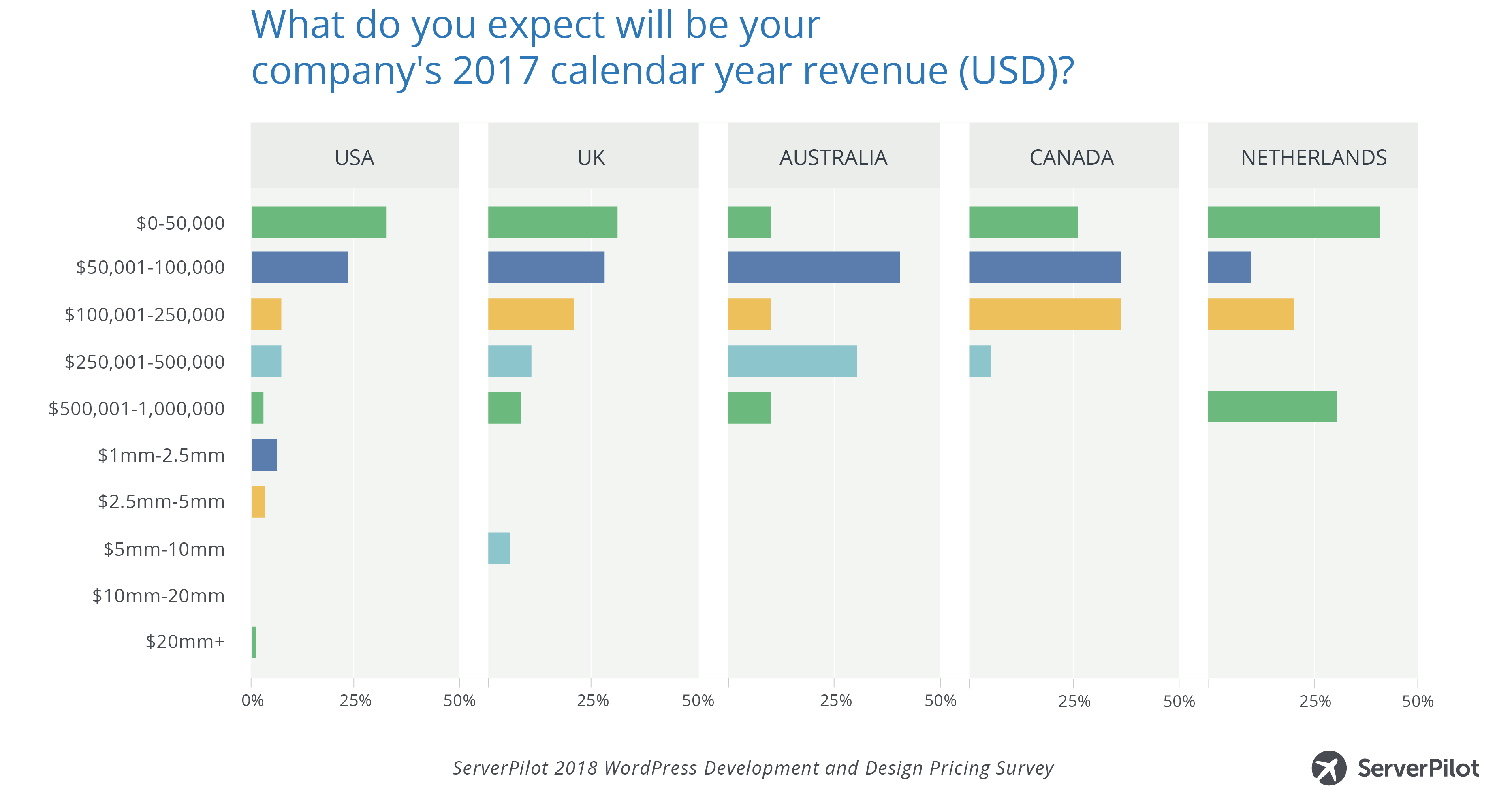 More than half of companies report that they are making $100K or less in revenue—and that includes many that are four or more years old. This indicates that many WordPress companies are single freelancers or freelancers using a few contract employees. (Data below confirms this hunch.) 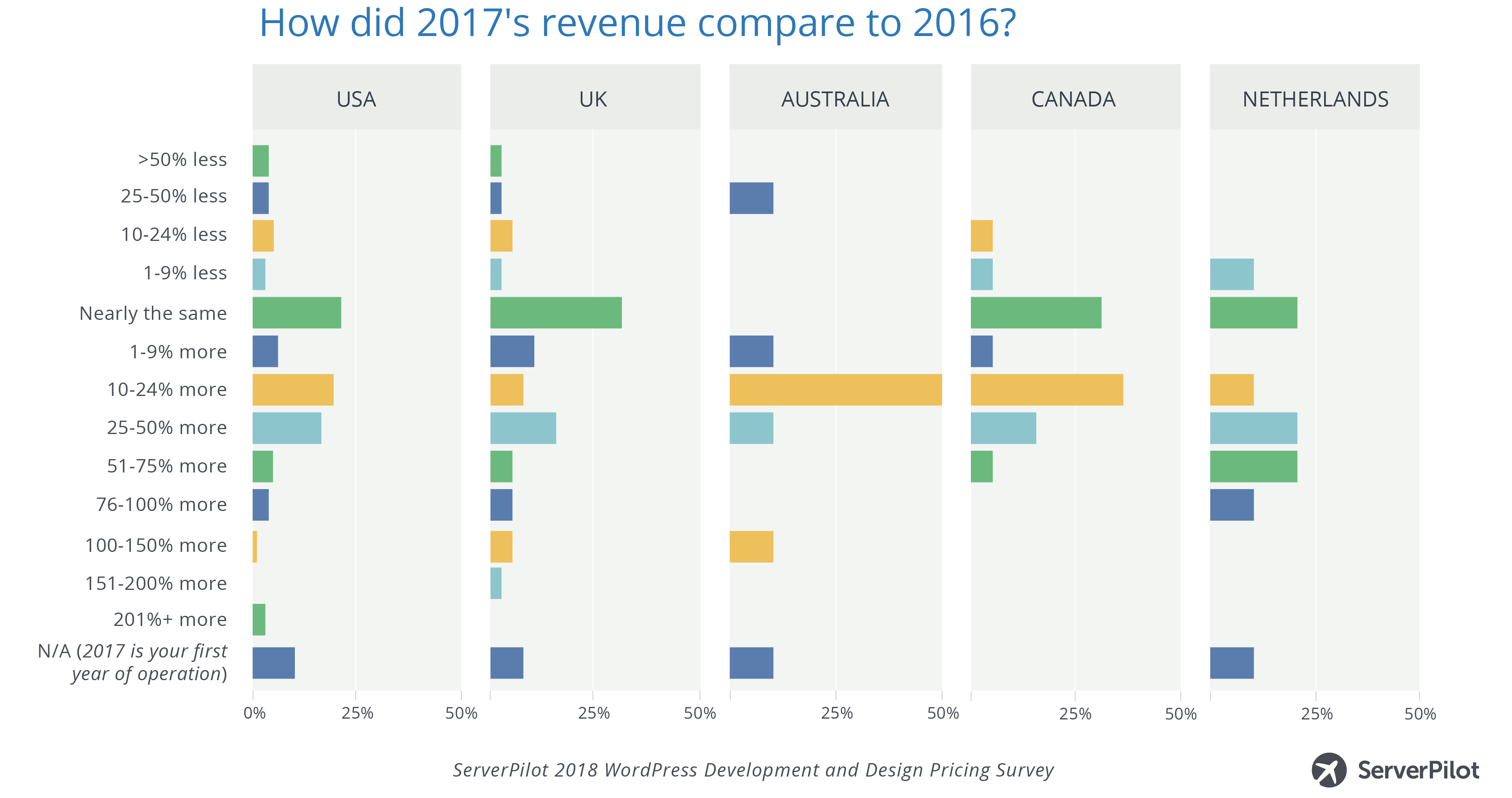 Revenue seems to be growing—modestly—in the WordPress development and design industry.

Among companies that were at least two years old, a majority (53.3%) reported revenue gains of 10% or more. But only 4.7% reported 2x growth or greater.

On the bright side, only 14.8% of companies reported a revenue dip. 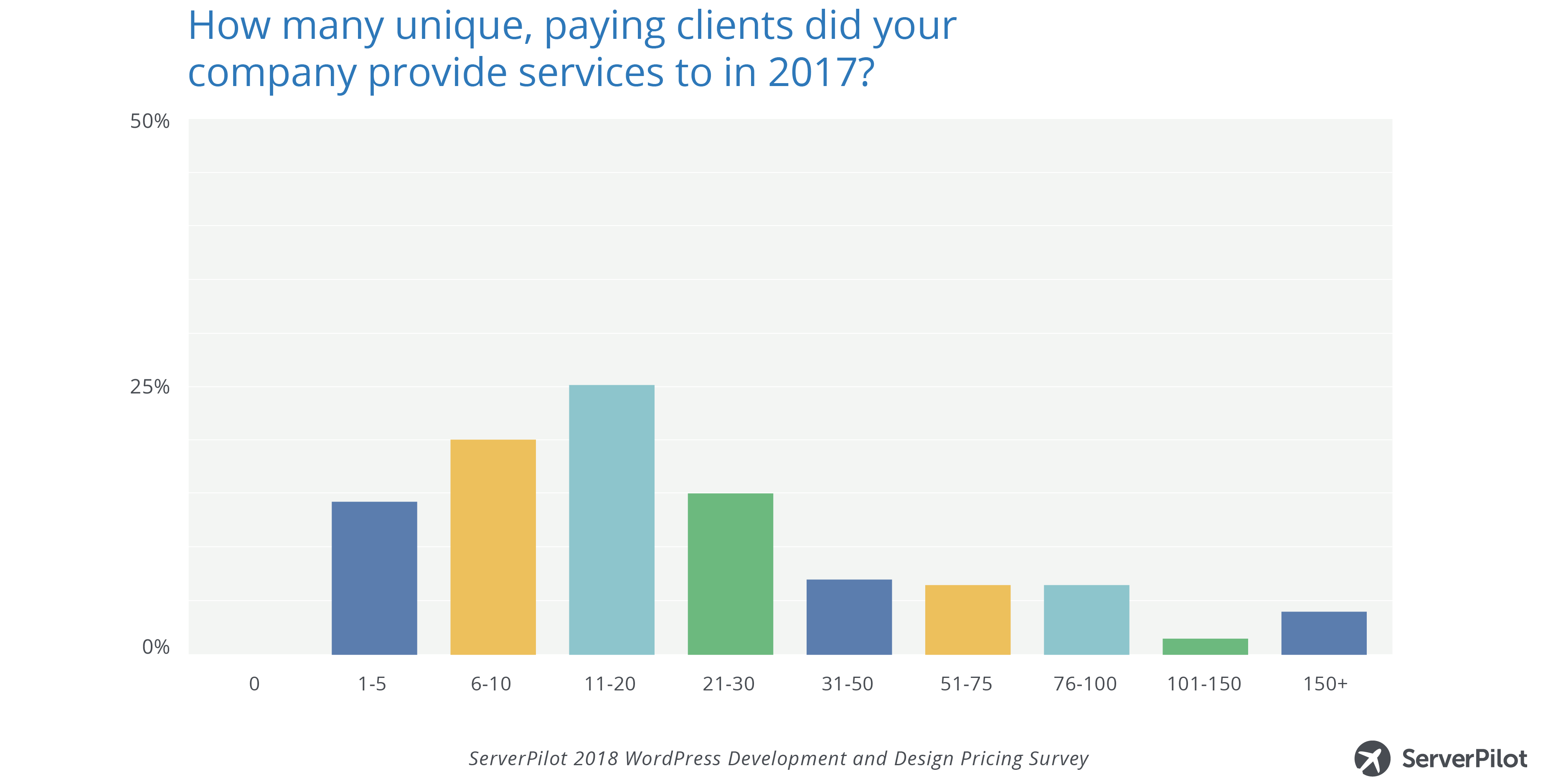 Our survey uncovered a busy subset of the WordPress design and development industry—4.4% of companies surveyed said they serviced 151 clients or more in 2017. Most firms served 30 clients or fewer (73.9%).

Freelancers managed 20 clients or fewer. The majority of firms with multiple full-time employees had at least 6 clients in 2017. And among high-revenue companies—those reporting $1 million or more in revenue—the majority had at least 50 clients.

We also asked companies to estimate the size of their 2016 client portfolios. Comparing 2016 to 2017 didn't reveal any substantial changes. 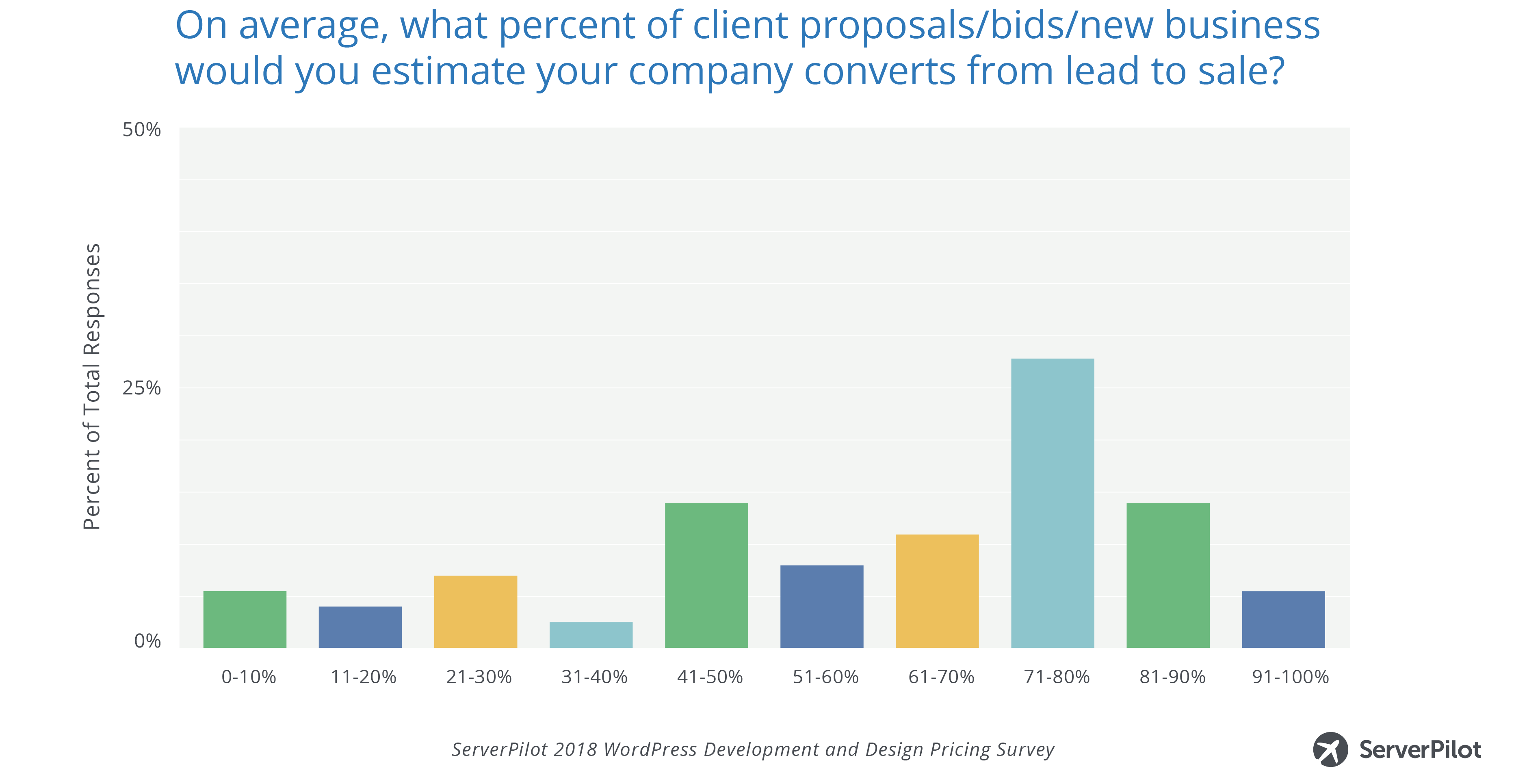 We asked respondents to estimate how often bids are contested and how often their proposals lead to a new sale. The results tell us that the majority of WordPress projects are uncontested. Our guess is that this is a result of a client being referred to a firm and selecting them without "shopping around" or potentially that clients don't mention whether they're looking at multiple firms during the proposal process.

On average, respondents converted their projects to sales 63% of the time, which would make sense for projects that aren't receiving proposals from more than a couple firms.

That, to us, illustrates the importance of referrals, organic search, paid search, and other inbound lead generation tactics. If you're the first company that the potential client reaches out to, you have excellent odds of getting the job. 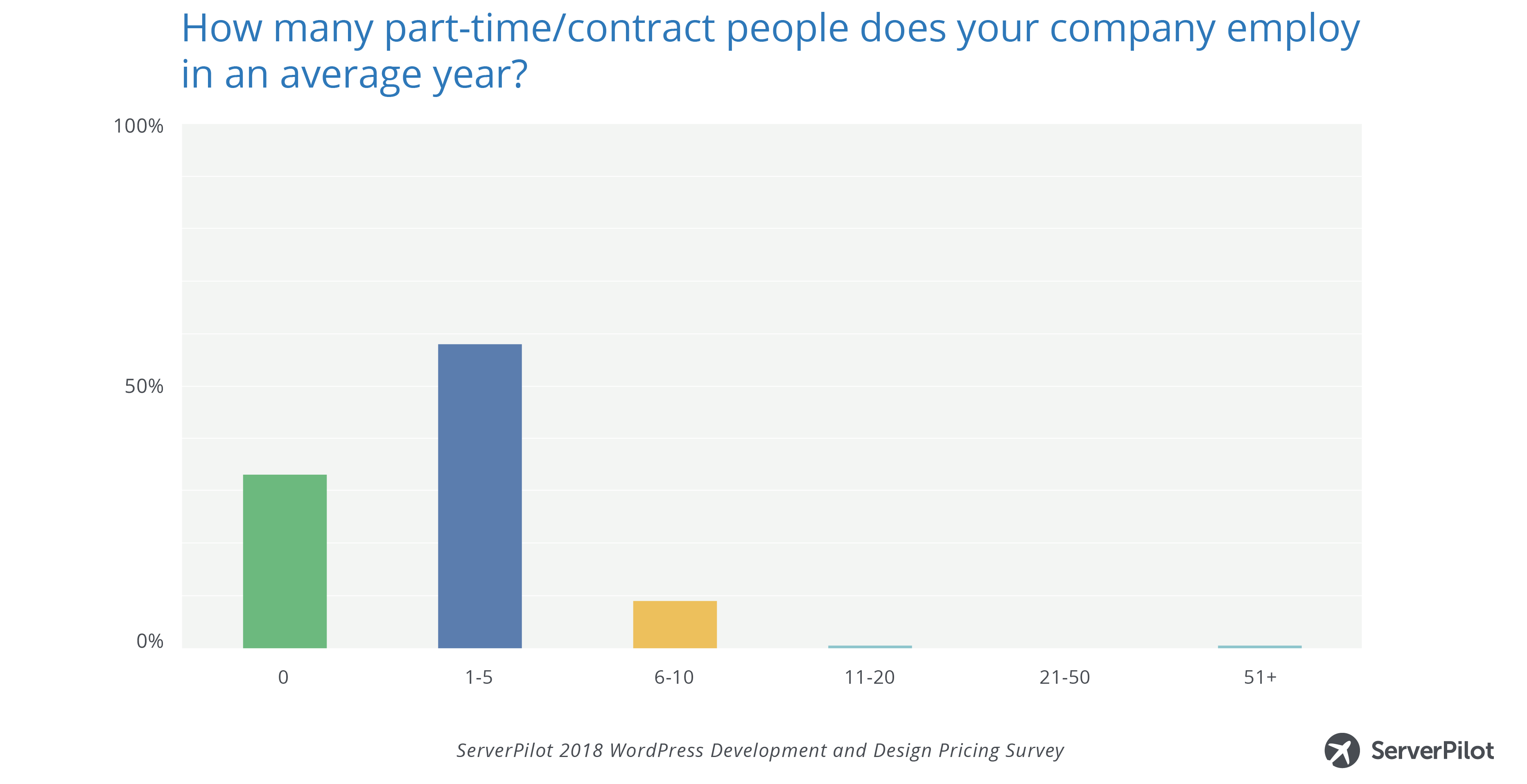 Most WordPress design and dev companies are small shops—85.9% have five employees or less, and a majority utilize help from contractors or part-timers. Nearly half (48.9%) are solo operations. 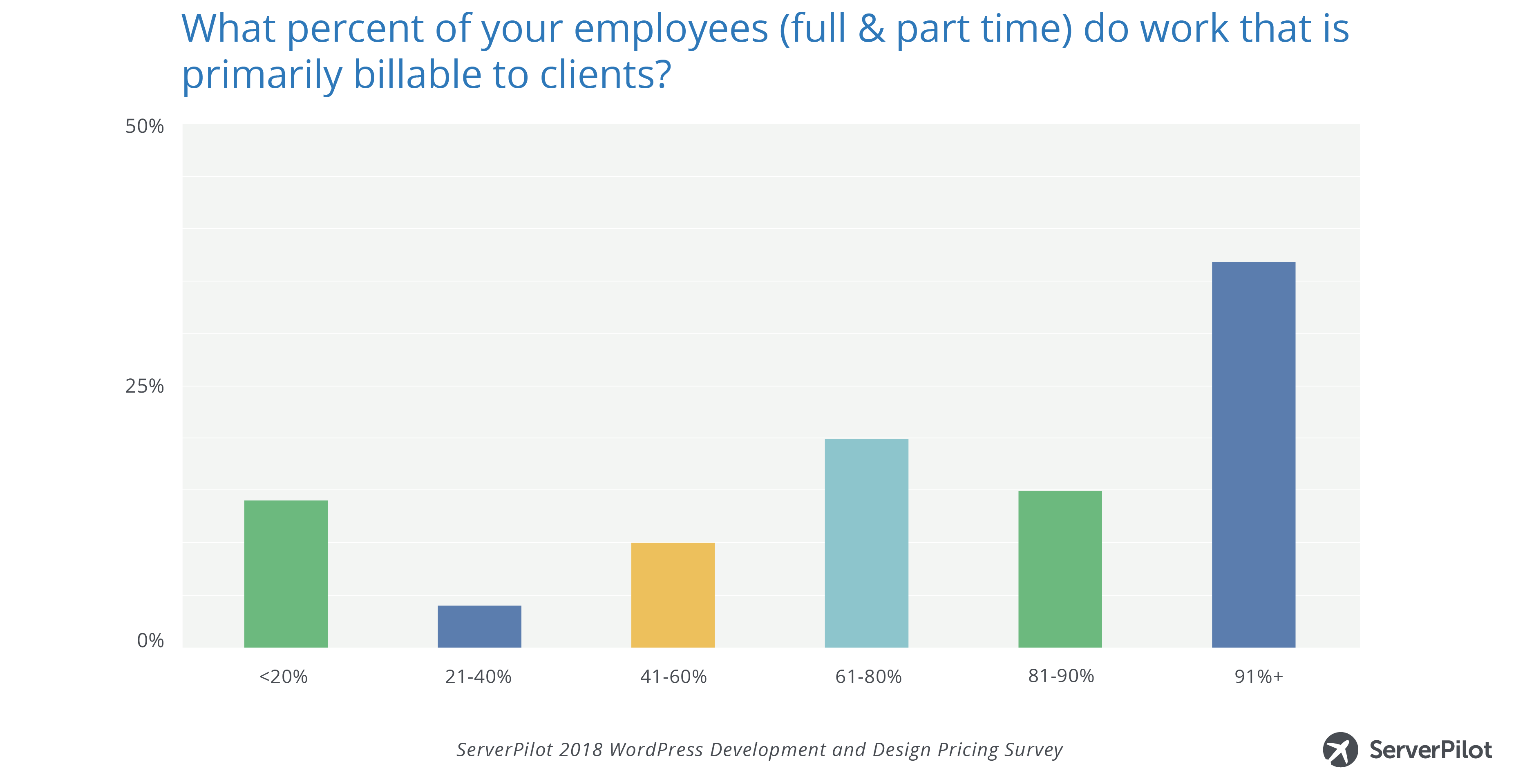 With most shops being small, it's no surprise they only carry employees that bill client time rather than heavily investing in non-billable support staff. 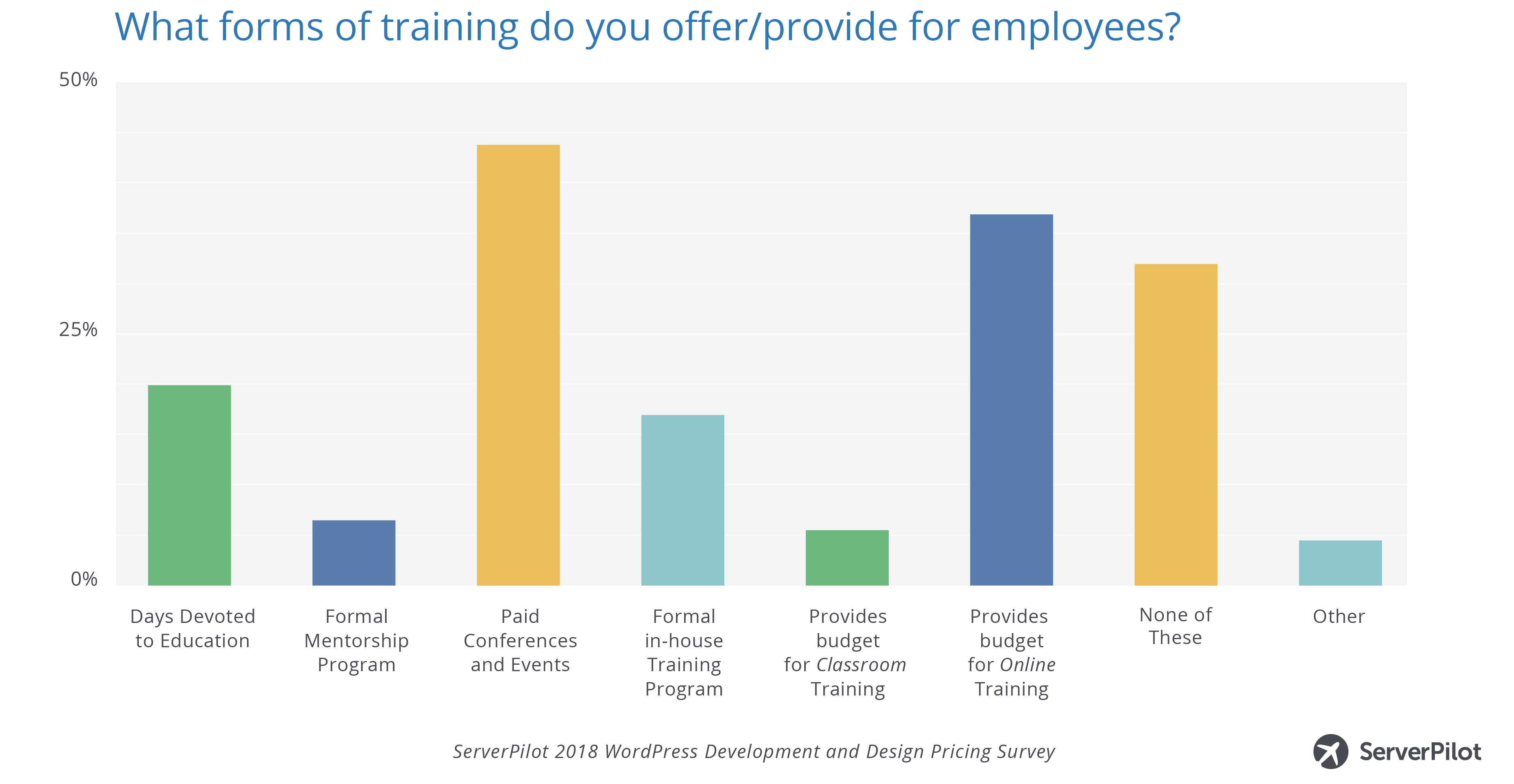 We filtered out all single-person companies for this question. Among companies with more than one employee, most offer some sort of training, primarily in online lessons or occasional conferences. However, we think it's surprising that over 30% of these companies don't offer any ongoing training to their employees.

In a field that's as deep and quickly evolving as WordPress design and development, we feel that ongoing training would be extremely beneficial to organizations of all sizes. 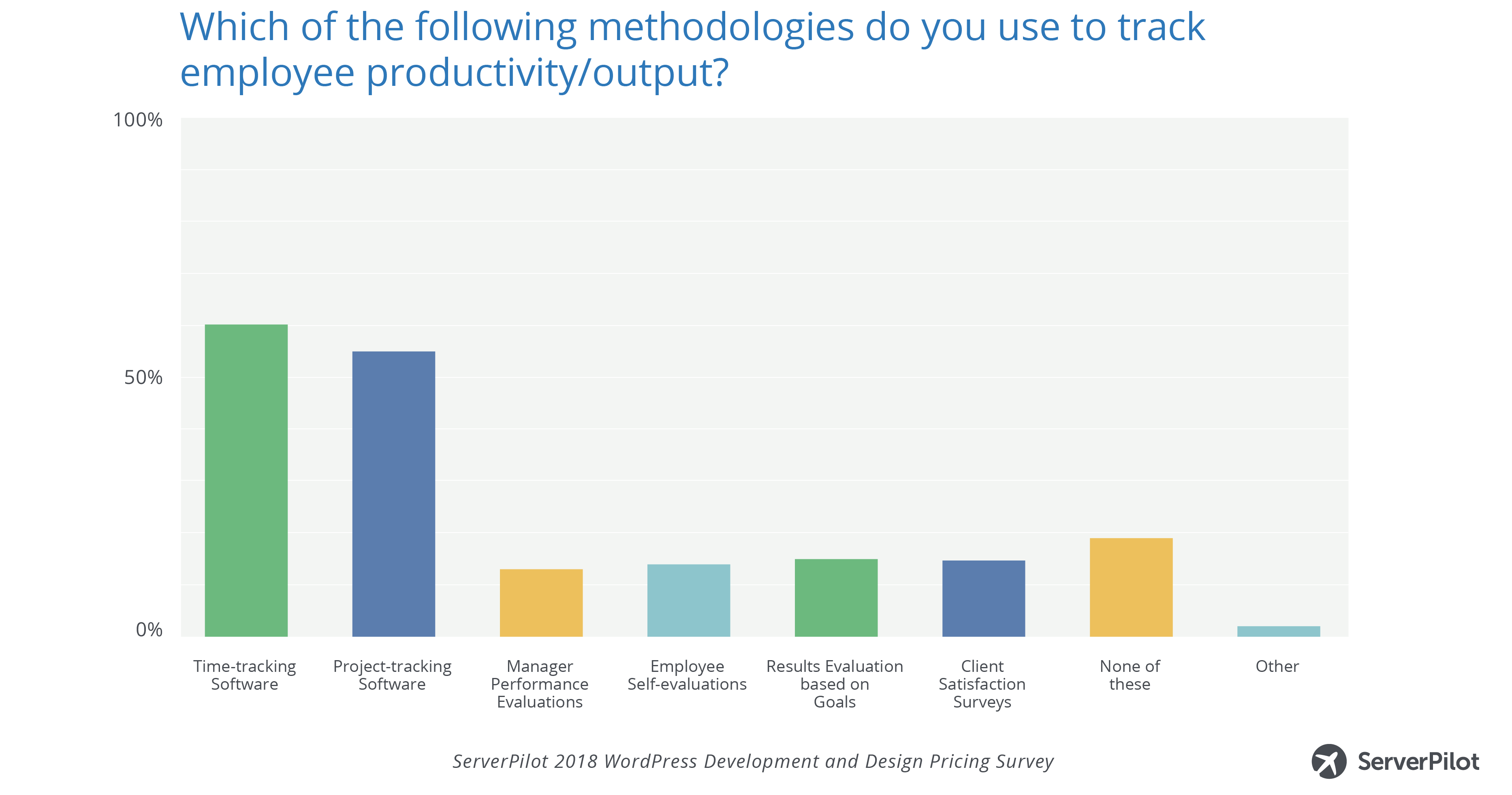 We were surprised to see that 30% of companies aren't using time-tracking software. Even if you're just a solo practitioner tracking your own work, knowing how you're spending your time can be really valuable.

That's it! Thanks for reading this survey—and thanks most of all to the folks who took the time to answer the survey. I hope you've learned something that can help your business.

We plan to re-run this survey in the future—with a couple of changes. We'd probably make the hourly price ranges a little more granular to zero in on that $25–$100 range. We'll also ask about specific project costs—so, templated websites vs. custom builds, for instance.

If you have any thoughts on the results, ideas for future questions, or requests for breakdowns of these results, let us know on Twitter at @ServerPilot!